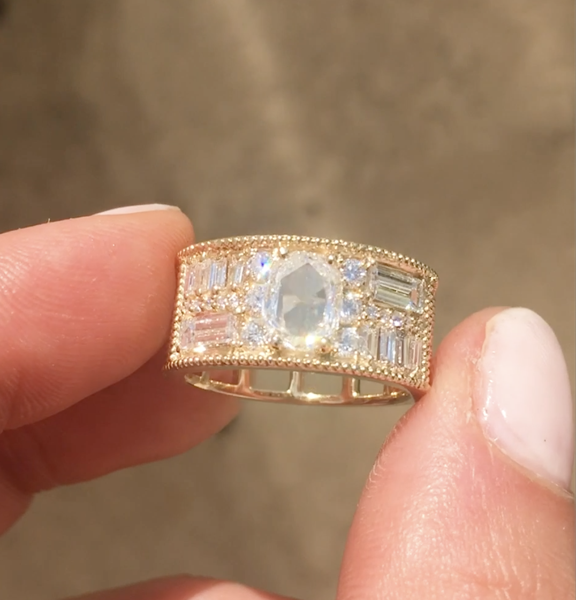 The four C's of diamonds are easy to identify: Carat, Cut, Color, Clarity. The four C's of a brand? Maybe not so much. Here, we ask Pietra's jewelry designers to tell us what makes up their four C's: who is their dream celebrity? What is a common trait of all their amazing clients? What is the most prized piece from their collection, and what is unique about their craft.

Jonathan Van Ness. I would die. I secretly have been trying to contact his publicist. I think he's so empowered. The idea of this binary personality attached to your gender, or like the idea of gender as performative--he totally turns that on its head. And he's just such a wonderful figure both for the gay and the straight community. And he's just like fabulous and positive. I think the positivity that radiates through him and that's something I would definitely want to attach my brand to.

They all have in common the fact that they don't want a traditional ring. I think that a lot of people, especially people who are non hetero or not gender binary, cis women want an engagement ring or a ring that really feels like it's representative of their identity. And it's not just rock on band. It has a lot more of their personality and their style and feelings in it. Also, that interplay of masculinity is something that almost all of our clients are looking for.

One of the first pieces I made of jewelry as an artist, in 2013, was this rosary that was created with gold birth control pills. I thought it was cool as it got a lot of attention at the time. That just really resonated with me. It really resonated with customers. And it felt like a piece of art as much as it did a piece of jewelry. It looks very cool on. I would wear it all the time. Others would wear it all the time, sort of in an everyday way. But it also had this whole meaning to it.

Another one that comes to mind: Recently I made a ring that is probably our most popular ring on social and Pinterest. We really worked with the client on this ring together. It's like I became a part of their relationship. And it just became such a meaningful piece that I just designed that entire collection based on it. It's called Diamond Mosaic and it's inspired by the mosaic tiles that I just grew up absolutely loving.

I think we do a lot of things the old fashioned way. I will talk to clients on the phone to get to them. I will draw actual renderings for them. We're not afraid if someone comes with a picture of something that looks absolutely impossible to create. We create everything in the United States so, having personal relationships with every part of the manufacturing process and with the design process is something that's fairly unique.